Caroline Lambert
Carol strongly believes that different toys appeal to different kids and their needs. She loves sharing her experience as a parent while exposing the pet peeves and amazing advantages of each toy. Additionally, Carol is an avid collector, always considering whether a toy has collector potential. Carol is here to share the best toys she finds because she's passionate about them and wants other parents to benefit from their potential rather than the setbacks.

My kids call me the toy-selection guru, but I was intrigued by a new concept. I spotted a fabulous toy design in writing the best Dinotrux toys guide. It speaks to the motherly instincts that tell me to select toys that improve my children’s educational journey. I’m all about education in playtime activities.

Dinotrux is an exceptional themed toy with the potential to appeal to more age groups than the show does. I realized that Dinotrux inspires fun and exciting educational types of toys. My daughter knows the show, but my son has outgrown the series. Fortunately, he never outgrew the Dinotrux toys, and I’ll show you why.

Dinotrux toys come from a popular kiddies series on Netflix. However, they suit children of all ages if they still enjoy the concepts of dinosaurs and vehicles. Boys will especially love the unique, creative combinations. For example, some have remote-control abilities, and others roll around to interact with the primary dino vehicles.

Dinotrux toys are superbly interactive and educational for children up to 12. The sensory and creative experiences help kids practice their most basic skills while enjoying the unusual designs. There are various ranges, and the toys have multiple benefits. Here’s a quick look at the top Dinotrux dino vehicles:

The Ultimate Guide to Dinotrux Toys

Dinotrux is one of the extraordinary concepts to hit the toy world. Combining construction models with dinosaurs is like heaven for kids who love both ideas. There’s a lot of potential in this concept, and I’ll show you how before sharing valuable tips and how I chose the best Dinotrux toys.

Dinotrux is a cute animated series children love, and it introduces new creatures that keep their minds creative. There are so many children’s shows today, and designing an original idea is like mopping the ocean. I know how hard it is to think of original concepts because I’m creative by profession.

I’m also a mom who knows how kids lose interest in unoriginal concepts. There are too many dinosaurs, cars, and transformers toys. So, I have to think creatively to pick suitable toys for my kids. However, Dinotrux introduced an original idea where dinosaurs and construction or heavy vehicles become one.

I had to know whether toys were available when I saw my daughter sneaking an episode. Then, I saw the creativity behind the toy concept that lays a foundation for children to learn. The toys offer many benefits, and parents love seeing their children grow through playtime experiences.

There are different types of Dinotrux toys, and they have varying abilities and fun features.

The Dinotrux toy range includes a few characters beyond the dinosaurs and construction vehicles. For example, “reptiles blended with tools” is called the Reptool range. Here are some examples of the Reptool range, which are hard to come by:

The Reptool toys are smaller than the dino vehicles. Still, they interact with the dino toys and have extensive interactive features. The toys roll around and complete an imaginative playtime for Dinotrux fans. However, they might not appeal so much to older kids who want the dino vehicle combos.

All Dinotrux models that move with touch or when a child moves around them will mimic the movements children see in the show. Some models even make noises to match the show’s characters. In addition, Dinotrux toys are highly interactive, allowing small hands and young minds to engage with them.

A few Dinotrux toys come in PVC models for bathtime fun with little kids. However, the primary material for Dinotrux models is die-cast metal. I love this news because die-cast toys last much longer, and the interactive features won’t break down as quickly when kids play with the toys.

Dinotrux also offers a range of storybooks, from which Netflix got the show’s idea. Storybooks provide a different kind of toy, one that teaches through reading. Small children love story time before bed. Here are a few Dinotrux storybooks available:

The storybooks are for little kids, and the last option even includes sound effects and comes as a board book for babies and young toddlers.

Education is at the center of everything I consider regarding toys. My first tip is that you consider Dinotrux toys for kids who love construction, vehicles, dinosaurs, and anything related to the show. Themed toys provide a platform to have fun and learn. Children are also more likely to continue enjoying their favorite themes.

Dinotrux is a fabulous gateway to educational play if children love the themes. Don’t give children toys that bore them because everyone has the same. Instead, give them original themes and ideas to inspire their minds. Dinotrux toys offer educational benefits because they’re a sensory experience with interactive qualities.

The wheels turn, and the dino vehicles are flexible with easy-to-maneuver joints. Little fingers have endless fun. However, Dinotrux toys also appeal to older kids who enjoy imaginative play. Kids don’t even need to love the show to love the toys. Most boys love dinosaurs and construction vehicles, much like my son.

How to Select the Best Dinotrux Toys

I’m obsessed with Dinotrux because of the combination of dinosaurs and construction or destruction vehicles. I want Dinotrux originals that show the best characters meeting a dino vehicle transformation. I also want die-cast models that last forever.

Dinotrux toys are phenomenal and creative, coming from my creative, professional opinion. Let me share the incredible dino vehicles taking the world by storm. I love that they appeal to more kids than the age group who watches the show. I’ll share what makes me happy and unhappy about each with some fun facts.

Ty Rux and his friends are a fantastic choice for kids who love the show. He comes with his best friend, Revvit, and the six toys complete the main characters from most episodes. My son loves how Ty Rux combines an excavator with a Tyrannosaurus Rex, representing a formidable force. He’s also the construction team’s leader. 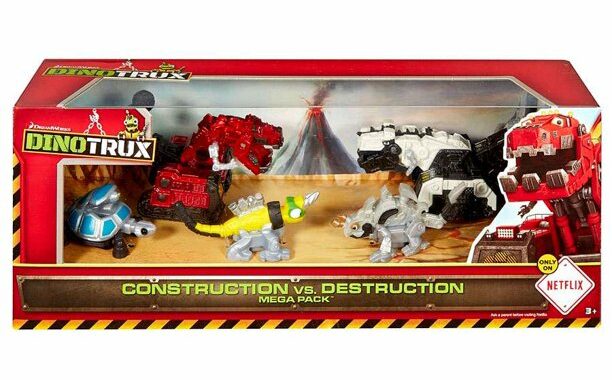 I love the destruction set because it includes characters you won’t easily find on their own. I searched hard for D-Struct and Skrap-It, but I suppose the destruction crew aren’t as loved and don’t make toys. So, the construction versus destruction set is the only one I found, making it sought-after for die-hard Dinotrux fans.

Dozer is one of the cutest characters now that I’ve learned more about these dino vehicle toys. He almost looks like a pet from another world. My daughter says he has a short temper with a grumpy nature, but he’s a great friend to the construction crew. Dozer Dinotrux makes me think of a pet dog.

Technically, the Dragonslopter comes from the Reptool range, but dragonflies aren’t reptiles. That’s why I’m adding this unique creature. It doesn’t belong to reptiles or dinosaurs, but dragonflies are a beautiful mystery I believe existed when dinosaurs did. They’re ancient creatures, and the Dinotrux toy is gorgeous.

Garby is one of the funny characters, according to my daughter. He’s a little flatulent and can pass the stinkiest gas. I’m sure this gets little kids giggling like crazy. My daughter thinks flatulence is one of the funniest things, so I understand her affinity for the little garbage truck. He looks like an adorable character from the show.

Ty Rux is originally a red dino vehicle, but he also comes as a green version. I can imagine how every child would want Ty Rux because he’s the leader of the good side, constantly defending their world. Children unfamiliar with the show would also love him because he’s a colossal T-Rex born into a construction vehicle.

Rollodon is a unique character from the show because it’s untamed and likely to steamroll anything in its path. The dino vehicle doesn’t say much in the show, and it’s unlikely to have a wide range of sound effects. It’s a cool character because you never know what to expect. It can turn everything into a stampede if desired.

Scoot is another cute dino vehicle. The character is one of the smallest, almost as tiny as the Reptools in the show. Unfortunately, the toy is also one of the tiniest, which works against my pros. However, the dinosaur that inspired Scoot is one of my favorites, so the little guy earns a spot among the construction crew toys.

Skya is a fun dino vehicle that looks like a Brachiosaurus. She’s well-matched with a crane that lifts heavy items, and she has a sassy personality. I love Skya because of her “can do” attitude. She believes she can do anything her construction friends can do, and she’s not wrong. I love cartoon characters with sass and determination.

I love daring cartoon characters because they also teach kids about determination and trying new things. But, a daring attitude can also get kids into trouble for trying new things. For example, ton-Ton has a daring personality with a hyperactive nature, making me think of a toddler on a sugar rush, but he’s a friendly dino.

The original Ty Rux is a fantastic choice for young fans who watch the show and older kids who enjoy dinosaurs crossed with construction vehicles. Ty Rux is the hero, and the dino vehicle toy looks like it will take no hassles from the destruction crew. Ty Rux and his friends often defeat D-Struct and his goonies.

Answer: Firstly, Dinotrux is a creative concept as original as The Transformers when the show first came out. Secondly, the die-cast dino vehicles are highly interactive, making them educational and exciting for kids beyond the show’s age range. Finally, boys love heavy cars and dinosaurs, making the toys more evergreen.

Question: What Are the Dinotrux Models in the Show?

Answer: Ty Rux is a name, but the T-Trux is a model combining a Tyrannosaurus Rex and an excavator. The Craneosaurus is a crane mashed with a brachiosaurus, and the Ankylodump is a dump truck blended with an Ankylosaurus. The creator was undoubtedly creative, and the combos are known as dino vehicle models.

Question: What Type of Dinosaur is the Ty Rux Dinotrux Toy?

I love nothing more than educational toys that allow my children to have hours of fun. As a mom, education is my number one priority, but excitement and playtime are the priorities for kids. So, offering my children creative and original ways to meet their passions and mine is a win.

Dinotrux toys wowed me because of their originality, but the more I learned about them, the more impressed I became. The educational qualities far exceed the creative edge. If your kids don’t have the toys, it’s time to get onto the Dinotrux wagon. Determine which dinosaur they love or watch their faces light up with the show.

Ty Rux is the construction crew leader, and any show fan will love him. The toy is also a remote-controlled T-Rex combined with a construction vehicle, suitable for any child who wants interactive toys. So, pick your original idea, and get your child a new Dinotrux model today.